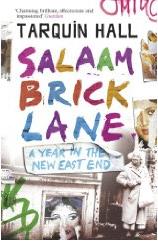 At the beginning of Salaam Brick Lane, we are confronted with the glaring disparity between an advertisement for and the reality of a place. Hall is describing his future home, a squalid and ill-constructed attic with scanty furnishings and none of the conveniences that we have come to think of as necessary to modern life. The attic sits atop an illegally run sweatshop. This could easily be the third world, but it is not. This is London –- and Hall’s first defamiliarised, paranoiac encounter with the ‘mere reality’ of the East End, the immigrant’s view where he sees something of the world of the underclass.

We are quickly told why Hall’s view is that of the immigrant or the outsider. He has returned to London from years spent abroad as a journalist and has never lived the solitary adult life of the city. He has lost touch with his old friends, and his relations with his parents are strained because he wishes to marry a woman outside his ethnicity. He has been forced into independence. Perhaps not unreasonably, he expects to resurrect the familiar, white middle-class world of his childhood; he has anticipated buying a comfortable home in a leafy London suburb, keeping his nice job in journalism, calling his girlfriend over from overseas, settling down and doing well for himself. He has not yet realised the great difference his privileged upbringing and connections have made in his life and has underestimated the effects of the ever-increasing competition for life in London. He has slept while we were awake; he has thought of becoming an Englishman according to an outdated, out-priced definition. Like any other immigrant, this hungering young man has just learnt his great mistake: that Mother London breaks everyone’s heart.

The rest of the book shows how Hall comes to terms with this heartbreak, that perhaps a great many young Londoners feel acutely. It continues, in a gothic vein, with Hall’s uncanny mirroring of the immigrant situation. He feels caught in a prison he cannot escape, and he finds himself enmeshed in the solitary, mostly male world of the dispossessed, the unemployed, the poverty-stricken, the angry, the horny and the depressed. He presents this as the criminal/criminogenic world infiltrated by the black market economy. Everywhere in the East End, even in his readings of the past, he is confronted by the suffering of figures trapped between two cultures – including himself. Outré scenarios, strange accents and despairing, lonesome spirits characterise his life. He finds himself doomed to repetition, living out the part of the immigrant, spending days reading in the same libraries, searching employment, at the mercy of thrift and his landlord, surrounded everywhere by the restless and the hungering, those cut off from any kind of normative grounding or hope of ‘integration’. Everywhere he is exploited by others. Like many other immigrants, he sends for his girlfriend from overseas, effectively cutting her off from her family and career without being able to take her out of this underworld or offer her something better.

In writing of coming to terms with this existence –- of London and its criminality and anomie, the strange instability of the London accent, the harshness of beginning a life here -– Hall attempts to translate the plight a generation faces as a new underclass, with the expensive absurdities, forced homelessness and disconnection from the capital. After all, his experiences reflect not only those of the immigrant, but those of many others trying to make it on their own in this city. This translation necessarily carries with it a heightened awareness of the motivating power of unforgiving dreams which make life in the capital so hard to relinquish. Particularly acute in the book is the awareness of the dream of identity, of Englishness, which draws everyone in. Hall’s experience –- his understanding of his own story of immigration and the many stories of the immigration of others –- allow him to ‘understand’ the dreaminess, the fictitiousness of this constructed identity and destination and to put himself into their shoes, to accept their language, their particular relation of London and Englishness –- the experience of being ‘something of the outsider’.

And towards the end, because of his recognition of the dreaminess of London existence, Hall has at last chosen his place; he has surmounted the ‘mere reality’ of the East End. He has been regaled with stories of great suffering and has seen the human spirit endure; he has seen that it is possible to carve opportunity and new potential out of the East End, a new Englishness. He has picked up the language created by generations of immigrants and ‘understood’ its nature. The book ends with Hall ‘having overcome’ –- he has a career in his chosen field, he is married, he has moved out of Brick Lane but still lives in the East End. Like many immigrants, he has moved up in the world and has changed his aspirations accordingly: Stoke Newington is now on the horizon.

Salaam Brick Lane can be situated within a rather conventional form of ‘travel writing’ which makes it easy to follow. With its spying on and uncanny doubling of the immigrant situation, the book perhaps appeals to a white, middle-class audience whose English identity has been ‘threatened’ by the Asian Diaspora or who have been forced, because of the property boom, to move into parts of London they had no wish to enter and have never engaged with their ‘ethnic’ neighbours. Yet despite a book jacket full of impressive blurbs, Salaam Brick Lane fails to show any deep understanding of pluralism or community. A year in Brick Lane seems to have been insufficient for Hall to have plumbed the psychological depths of his subject. Indeed, as a British Asian man living in East London who has worked for half a year in Brick Lane, I found curiously little in the book to sustain my interest. I have met the people of whom Hall writes. In real life, they are more ridiculous, more heroic or more tragic than Hall’s simplistic presentation would suggest. The issues of inter-marriage, cultural history, identity and the clash of cultures that the book takes up are all important topics, but Hall provides no new insights. Hall attempts to ogle the people and their languages anthropologically, but we’ve heard it all before: that the East End is full of racism, misogyny, dislikeable people and general unpleasantness and that some of its inhabitants actually revere nasty types, such as the Kray twins. This is obvious. But perhaps we are meant to credit such obvious observations when they are written by a public schoolboy.

The style aims at the comic; one reviewer even calls it Dickensian. Yet Hall’s style grates, and the personality he projects comes across as a preaching and strained busybody. He is no Dickens and Salaam Brick Lane is not literature, but banal journalism with a mocking edge. The book seems dated and compares unfavourably with work of its own period, such as Rachel Lichtenstein’s On Brick Lane. Perhaps the book has been so well received because it follows on the best-selling heels of Monica Ali’s Brick Lane and Zadie Smith’s White Teeth. Thus Salaam Brick Lane allows further exploration of London’s multi-cultural social setting without surrendering completely to anti-Muslim polemic, although the book contains a strange relation to ‘the threat of the Muslim’, since Hall reveals his suspicion and dislike of the British Muslim throughout, mocking and doubting the sincerity of the faith of ‘radicals’ and siding always with their opponents.

The Brick Lane of Hall’s book is cast negatively as a preliminary or transitional spot of embarkation leading into ‘normalcy’ and as a place where only the truly deviant remain. Almost everyone seems to be doing well at the end of the book and looking forward to a better future. However, the identity that they choose or Hall chooses at the end is hardly that of the independent man or ‘the outsider’. The slogan with which Hall closes – ‘COME HUNGRY, LEAVE EDGY’ – hardly seems applicable. Hall was obviously on edge before Brick Lane. Salaam Brick Lane is an inconsistent and ephemeral pleasure at best.