Looking at a photograph of Tony White on his publisher’s website, one is struck by the wrinkles of experience around his eyes. From what I can tell of his personal biography, White, the author of five novels and a prolific short story writer, is very much a Londoner. His acclaimed novel, Foxy-T (2003), which examined the language of the East End, led to him being lauded by Michael Moorcock as a ‘serious, engaging voice of the modern city’ (theguardian.com – 27 September 2003). In addition, White has taught at a number of London institutions. He was creative entrepreneur in residence in the French department of King’s College London and writer in residence at London’s Science Museum and the UCL School of Slavonic and East European Studies. Until 2018, he also chaired the board of London’s award-winning arts radio station Resonance 104.4fm. 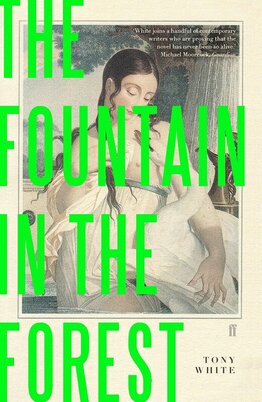 The Fountain in the Forest is a continuation of White’s exploration of London through fiction and its main character a London policeman who investigates a London crime scene. The London of the novel is inspired by reality. However, the depiction is, ultimately, a product of imagination and invention. As White writes in the author’s notes at the end of the novel:

Some readers will have noted that the ‘Royal Palace Theatre’ depicted in this novel occupies roughly the same space and location as London’s famous Theatre Royal, Drury Lane, but they should also note that any similarity ends there. This Royal Palace Theatre is completely fictional, its name a crude translation of Théâtre du Palais-Royal, after successive Parisian theatres so called.

The main character is long-time Londoner, Rex King,with his curiously tautological name which is explained as a joke by his parents but which also reflects his power as an officer of the law too since he works as a Detective Sergeant in Holborn Police Station. King was a beneficiary of Thatcher’s right-to-buy scheme for Council tenants in the eighties. As a result, he lives in a prime property location in Central London. King quite deliberately walks to work along Great Ormond Street where he finds grounding in the tragic and artistic sights there:

The scenes of suffering that confronted him on the steps of the hospital were redolent of the Passion, or a pietà on some grimly rendered Gothic reredos: every mother in the eternal role of Mary; every father gaunt and red-eyed, standing with head bent like some beseeching apostle.

Ironically, King’s clinging to the ‘art’ or ‘painting’ of life in London, albeit the painting of suffering, leads him to what suggests an art of death and ultimate suffering, a mutilated body that has been discovered in the studio of his friend, the so-called paint frame of the Royal Palace Theatre on Drury Lane. The reader follows King’s investigation of the homicide. However, if the novel is a police procedural, then it is a particularly inventive one, with interlaced and twisting plot lines and a serious investigation of the law, politics, memory and identity.

Lauded for its experimental playfulness by critics, this novel is remarkably rich in significance. Because the novel presents a police officer in the figure of Rex King, who is so wonderfully characterised and combines seeming contradictory qualities, it seems to invite and foreground reflection upon the law and its productive ambiguities and contradictions. Thus, one important idea is how the law is related to the repression of the state and to the curtailment or enabling of revolution. The French Revolution is obviously and repetitively referenced by the novel since its chapters are headed like the French Revolutionary Calendar as the police investigation gradually unfolds. As a result, connections are always being made between the law and revolution, between the idea of legal transformation and the defence of the status quo.

An important idea that the novel explores is that of the legitimacy of the law, the law itself being judged in the form of the legal judgement pronounced on the police. Thus, police brutality and how it is seen by the public figures as an obvious motif of the novel. This is evident in the novel’s treatment of the Battle of the Beanfield in 1985, where New Age Travellers were brutalised by the police when they attempted to set up a free music festival. There is also what appears to be a racially motivated example of police brutality which leads to murder, so the suggestion is that this murder is just as central to the investigation of the book as the other murder that the novel attempts to solve. In fact, not only is the murder reflective of the institutionalised racism of the police, but the murder is that of a Tennyson. The allusion to the poet suggests that what is on trial is the law’s murder of poetry and the poet, who we are reminded in the novel are ‘unacknowledged legislators’. In other words, what is under investigation is the law’s murder of those that write the laws, the ultimate source of legitimacy and authority.

The question is whether Rex King as an officer of the law and the power of the law represents legal status or the revolution, institutional racism or representative law, the people and the poets or the state?

What is beautiful and also remarkable about White’s novel is that the reader will have decided ideas one way or another as to what Rex King – as the personification of the law and its power –  really represents. The novel could be seen as providing plenty of evidence one way or the other and it is ingenious because it allows the representation of the law within the representation of its main character to suggest things through ambiguity, contradiction, irony and paradox. A reading of this novel could therefore be seen as an innovative way to get to know the law and the legal culture of our London and Great Britain more intimately and seriously: what exactly the law is made up of and represents, politically, aesthetically and morally, perhaps who the law really represents.

As I have read it, The Fountain in the Forest is an important and rewarding, balanced read and the novel is literally made up of ‘answers’ to the questions of readers, who are also always legal and political questioners and eternal students of the law, since the novel’s form of construction is through ‘mandated writing’ which has to include and be shaped by crossword answers.