Hangover Square may be Patrick Hamilton’s best-known London novel but The Midnight Bell (1929) – the title comes from the pub which is the book’s focal point – is the key to understanding his world view and the way he uses his own life to construct his fiction.

So who was Hamilton? Writing about his ‘pub novel’ in 1928 to his brother Bruce, Patrick Hamilton noted that it presented ‘a miraculous opportunity for reaping my wild oats! If ever a man knew the atmosphere and life and ethics of these places it’s me.’ Yet he had a comfortable middle-class lifestyle based on an income of £2,000 a year with an apartment at the Albany. He was an ardent believer in the Communist philosophy, albeit a typical English literary Marxist of his generation with an idealised view of Soviet Russia. He was not a reviewer or sat on committees or attended literary dinners. 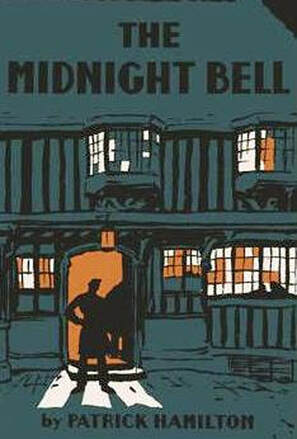 What he succeeded in doing was to understand the life and language of the pub, and in this regard The Midnight Bell, along with Hangover Square, has long been acknowledged as one of Hamilton’s greatest achievements. This was a skill developed by ‘breaking out of his solitude every night to sit in a pub, keeping very sharp eyes and ears hard to work’ (Priestley). Hamilton’s writing reflects an understanding of the ‘atmosphere and life and ethics’ of the bar space and shows an understanding of the saloon bar demotic, the social forces within it and the stories behind it.

The Midnight Bell is not solely about the pub space. It is also one the best novels of Soho life. Bob the barman finds himself infatuated with Jenny, a young prostitute who he first meets in the pub, ( her background is explored in a later Hamilton novel).  The novel follows her as she works her patch around the Dean Street/Shaftesbury Avenue area. It also pursues Bob and Jenny into the dance halls and nightclubs of Soho and later the flophouses and the prostitute’s flat in Fitzrovia. Hamilton’s writing predates the chief exponent of Soho noir, Gerald Kersh, by a good five years and its influence can be felt in later novels, among them Colin MacInnes’ Absolute Beginners (1959) and Robinson by Christopher Petit (1992).

Above all, though, this is a book about a pub. There are quite a number of pubs in Fitzrovia – the area west of Tottenham Court Road – and, as his biographers have established, Patrick Hamilton knew this area, and its bars, well. The Fitzroy Tavern was even in the 1920s a well-known drinking place, courtesy of its legendary landlord, Judah ‘Pop’ Kleinfeld. The interior of the Midnight Bell has a physical resemblance to that of the Fitzroy, certainly closer than any other pub in the area. The Wheatsheaf, just down the road from The Fitzroy Tavern on Rathbone Place, also offers a close match – and a resemblance too in its landlord and family.  This is Hamilton’s account of the publican at the Midnight Bell:

[T]he Governor and his wife […] were as benign as they were bloated. It was pretty obvious to everybody that they might both burst at any moment.

The Governor’s Wife’s Sister was a different proposition altogether. She was, to begin with thin. She was also dark, and tall, and bony, and ugly. She was, however, all-powerful — the true ruler and organiser of The Midnight Bell. She had, it was widely known, a Head for Business.

That bears more than passing similarity to the management at the Wheatsheaf, described by Paul Willetts in his biography of another Fitzrovia writer and drinker, Julian Maclaren-Ross:

The landlady was a short, plump spinster named Mona Glendenning, who ran the place in conjunction with her similarly rotund brother, Redvers, and his wife Frances, a spindly woman in a tweed suit and pince-nez[…]The Wheatsheaf’s comparative distance from the West End meant that few of the foreigners or the whores found there way there. (Willetts)

Indeed, the description could equally apply to Charlie and Annie Fairchild at the Fitzroy Tavern.

The exact location of the Midnight Bell, however, doesn’t quite fit either of these pubs. In the first chapter, the noise of the traffic from the Euston Road can be heard in Bob’s upstairs room: ‘[t]he thundering of the wind in his dream was the passing of a lorry in the Euston Road outside’. From the bar can be heard the sounds of ‘the dim roar of traffic in the Tottenham Court Road – the far thunder of trams in where the Hampstead Road began – the yelling of children in Warren Street nearby [sic]’. Later Bob decides to make a phone call to Jenny: ‘[h]e was going to use the box at Great Portland Street Station. The walk would take him about three and a half minutes’. This would put the pub at a point halfway between Great Portland Street station and Warren Street station. There was a pub at roughly this spot in the 1930s – the Goat and Compasses at 341 Euston Road, now an office supplies shop.

What is of more interest is the physical area in which The Midnight Bell is situated. Fitzrovia, with its pubs and cafes, has always represented a fringe and marginal space within London. It is the drinking culture rather than any discernible aesthetic, political ethic or philosophy that attracted people. Nina Hamnett remarked: ‘At this time several afternoon clubs started. They opened at three and continued till eleven pm. I found an extraordinary number of so-called business men who had nothing to do in the afternoon’.

Hamilton’s Fitzrovia represents a post-war bohemian space. The Midnight Bell is set in the late 1920s, and many of the men who drink at the bar are of an age to have served in France or Flanders. The companionship of the bar becomes a recreation of the sense of comradeship experienced in the trenches. The landlord, the ‘guv’nor’, becomes a symbolic reconstruction of the officer. Drink becomes a means of anaesthetising memories. This oblivion of memory becomes then the guiding imperative for those who drink in the Midnight Bell.

Hamilton employs three male characters that exemplify his understanding of the typical saloon bar culture. The most enigmatic of these is McDonald, known to the regulars as Illegal Operation. It is a name ‘transcended by reputation’. Hamilton notes of him: ‘[b]y performing one of these (successfully), it appeared he had abruptly terminated his career as a medical student, and served six months in prison’. His physical description presents an image that would not be out of place in any of the stories of Gerald Kersh, Alexander Baron, Julian Maclaren-Ross, or even Charles Dickens:

He was about thirty-two, and wore grey flannel trousers, a sports coat, rather dirty shirts, and knitted ties. He had sandy hair, rather closely cropped (as though he had acquired the habit in prison and rather fancied the style) and grey eyes. He had enormous ears, and along nose with a rather bashed in appearance – an illegal nose, in fact and a full mouth and a large chin. [He] was quite a good fellow if you didn’t rub him up the wrong way.

He lived in Fitzroy Square.

There is a noticeable use of prison imagery in this description, both in the cropped hair and the suggestion of violence against McDonald’s own body and others. Graham Greene employs a similar character in A Gun for Sale (1936), Dr Yogel of the ‘North American Dental Company’. Greene implies that Yogel is an abortionist, an illegal, if sometimes lucrative practice in 1930s Britain.

Another character is Mr Wall, ‘obscurely connected with motors in Great Portland Street’ and ‘a very sprightly little man [with] a red face, fair hair, twinkling blue eyes, a comic little moustache and a bowler hat’. Hamilton offers an insight into Wall’s character through his language. It is here that the context of the observations made by Priestley regarding Hamilton’s ability to listen and to absorb the language of the pub become apparent.

Similarly, in his own particular idiom, Martyrs were associated with Tomatoes, Waiters with Hot Potatoes, Cribbage with Cabbage, Salary with Celery (the entire vegetable world was ineffably droll), Suits with Suet, Fiascos with Fiancées and the popular wireless genius with Macaroni. He was perhaps, practically off his head.

Wall lives in his own little world, the world of the Saloon Bar. It is effectively his home; it is also his theatre. Like McDonald he is accepted as a face in the crowd, but not necessarily listened to. This desperate need for acceptance lends Mr Wall a tragic air, though the continual insistence in his speech suggests that there is an aspect of the bully about him.

The third character that Hamilton employs is Mr Sounder, the regular opponent of Mr Wall in their verbal exchanges. This is the most autobiographical of the saloon bar characters. He lives in Osnaburgh Terrace, where Hamilton’s brother had once resided and writes bad poetry/prose as did Hamilton’s own father, Bernard. Mr Sounder’s description can be read as an impression of such a writer.

His appearance was eccentric. Though of short stature he wore a thick beard and moustache which (though they did not in fact decrease his height) created an illusion of dwarfishness. This impression was augmented by the hair on his head, which went back in a thick mane, magnificent for his age, which was something over fifty.

Like McDonald and Wall the bar is his theatre space; it may be his only true existence. Mr Sounder’s tragedy is that he is unable to realise his true position. By allying himself to the social space of the Midnight Bell he has accepted a situation of waste and rejection.

Fitzrovia is not just then a space that hides those of dubious professions; it could also be viewed as a space into which people sink. Yet, Mr Sounder is one of the few characters in the saloon bar who has the potential to engage the reader’s sympathy. There is a sense of pathos about the man and his inability to understand the gap between his literary hopes and reality.

The Midnight Bell is now rarely known by its original name. Patrick Hamilton returned to the story of Jenny, the streetwalker, in The Siege of Pleasure, published in 1932. Two years later, The Plains of Cement focussed on Ella, a barmaid at the Midnight Bell and a secondary character in the initial novel. In 1935, all three novels were published together as Twenty Thousand Streets Under the Sky – and that’s how these Hamilton titles are best known.

Hamilton would return to the saloon bar in 1941 with Hangover Square, though in a different part of London (Earl’s Court) and with a markedly contrasting emphasis. While The Midnight Bell reflects the community of the bar, Hangover Square explores the reverse of this – the isolation that can be engendered in such solipsistic spaces. The precious few strands of community that existed in The Midnight Bell have evaporated and the isolation of the principal characters and all that it means becomes the dominant theme.