The absence of a single man in a gallery hung with portraits of influential historic figures is an enlivening, if slightly surreal, experience. While the lives and painted likenesses of history’s ‘great men’ still dominate the narratives of many of London’s public and cultural institutions, the Foundling Museum presents an exemplary demonstration of how much we have yet to uncover. Following a successful campaign by Art Happens, the Art Fund’s crowdfunding platform, this exhibition brings to light for the first time the women who were intrinsic to the establishment and running of the Foundling Hospital, illuminating the stories and contributions of women who operated at every level of society to ensure the Hospital’s success.

Hung in the place of the male governors who are usually to be found in the Foundling Museum’s Picture Gallery are now twenty-one portraits of women, all of whom were crucial to the establishment of the Foundling Hospital. In a re-examination of their 300-year history, the museum has brought to light the influential role of women such as Charlotte Seymour, Duchess of Somerset (1693—1773), and Dorothy Boyle, Countess of Burlington (1699—1758), who signed Thomas Coram’s (c. 1668—1751) first petition calling for the founding of a hospital for the care of London’s orphaned and destitute infants.

Coram, a seaman, was horrified at the number of children left destitute and abandoned on London’s streets, exceeding 1000 infants a year. The first half of the eighteenth century witnessed huge increases in population numbers and abject poverty. Combined with a convoluted Poor Law system that gave responsibility for administering poor relief to individual parishes, women and children were left especially vulnerable. This was particularly exacerbated for women who became pregnant outside of marriage, a situation viewed as morally and socially repugnant in contemporary eyes. Coram needed to win over the opinions of the aristocracy and the politically influential, in order to present a persuasive case to the monarchy for the founding of an institution that would provide destitute mothers with an alternative to abandoning their children in desperation. After ten years of unsuccessfully campaigning for the support of men in such positions, Coram turned to women.

Though not in possession of official power, these women used their influence as wives, daughters, mothers, and sisters to persuade their male relatives to give their support to Coram’s project. Their support for the first petition was crucial: presented to King George II in 1735, it catalysed widespread sympathy among the nobility for the hospital and helped overcome social stigma associated with such a project. Following a further two petitions in 1737, a Royal Charter was finally granted in 1739. The Charter lists 375 male signatories and makes no mention of the women who originally backed the hospital.1

Eighteenth-century specialist Elizabeth Einberg helped to identify the portraits of the twenty-one ‘ladies of quality and distinction’ who signed Thomas Coram’s original petition to King George II. The show brings together these paintings from across UK private and public collections and family estates, a remarkable achievement of archival and provenance work and a testament to the true collaborative heart of the show.

Viewing these portraits gives us not only a visual record of these women, but invites us to consider how their choice to lend their support to a philanthropic cause intersected with the wider constellation of their intellectual and social pursuits. In this way, they exerted agency and shaped their public persona despite strict codes of comportment dictating appropriate behaviours for women of the upper class and aristocracy. Andrea Soldi’s (c. 1703–1771) depiction of Isabella Montagu, Duchess of Manchester (c. 1706–1786) serenely poised as Diana, goddess of the hunt and chastity, is a stand-out work in this regard. We are also told in the catalogue that Montagu was a talented pastellist. A small group portrait by Charles Phillips (1708–1747) depicting petition-signee Juliana, Duchess of Leeds (1706–1794) in the company of Lady Charlotte Hamilton, Lady Isabella Tufton, and Henrietta, Countess of Pomfret, presents us with a rare depiction of a group of women in conversation, a format usually reserved for portraying groups of men. Upon being excluded from a parliamentary debate on Spain, Selina, Countess of Huntingdon (1707–1791) led a group of ladies and broke into the House of Commons gallery in 1737, shouting comments until the House was forced to rise. She is also portrayed by Soldi, in a family group with her husband and children.

The exhibition is also a chance to see examples by several leading artists of the period, including Sir Godfrey Kneller’s portrait of Anne, Dowager Baroness Torrington (married 1709, died 1735), herself an art collector together with her husband Thomas Newport, while a portrait of Frances, Baroness Byron (c. 1702–1757) by William Hogarth brings us face-to-face with the poet Lord Byron’s great-grandmother.

Leaving the gallery, the exhibition continues downstairs where we come into contact with the lives of the women who were intrinsic to the day-to-day running and success of the hospital. The stark contrast of material on display highlights the entrenched social hierarchies – no grand society portraits and Diana costumes for these women – and acutely demonstrates the importance of broadening scope beyond a limited focus on the ‘exceptional’ and most visible when addressing the absence of women’s contributions from the historical record. Recovering the lives of hundreds of matrons, wet nurses, scullery maids, cooks, and schoolmistresses, this part of the exhibition presents an array of letters, account books, reports, everyday objects, and photographs. The rigorous and painstaking research underpinning the exhibition is clear and demonstrates the wealth of information that can be gleaned from archival material to bring to light the lives and histories of marginalised groups otherwise unrepresented.

While the hospital’s first two female governors were not appointed until 1918, women were nevertheless active from the very start of the hospital’s opening, often in the form of informal advisory roles. Governors turned to their wives and other female relatives for help in matters such as clothing, education, and day-to-day household management. The museum holds the first and only painting of a female governor, Beatrice Forbes (1863–1944), the fifth woman to be elected as a Hospital Governor, joining her husband Major Patrick William Forbes (1861–1923), who was elected in 1904. 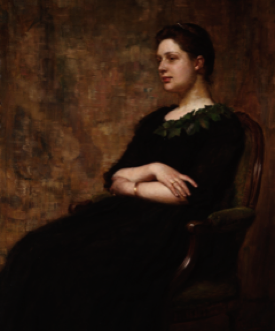 A range of original diaries, letters, and accounts together with enlarged fascimiles provide an insight into these women’s various roles and responsibilities. As inspectors, women worked voluntarily to supervise the rural wet nurses who cared for the infants. Juliana Dodd (1736–1778) worked in this role from 1759–70 and was vocal in her insistence on improving wet nurses’ working conditions, and her forceful letters against issues such as proposed pay cuts are displayed.

The hospital also employed women as matrons and schoolmistresses, while domestic staff such as kitchen and laundry maids were often recruited from amongst the foundling children. Mary Beecham was employed as a scullery maid in February 1767 – the presence of a mark in place of a signature on her contract indicates that she was unable to read or write, bringing us into immediate contact with the struggles of hundreds of women in her position. Tracing the changing culture and patterns of work up to the Second World War, the exhibition draws out women’s vital and invaluable contribution to the Foundling Hospital’s success.

Located within the context of a nation-wide programme of events and celebrations marking the 100th anniversary of women’s suffrage, ‘Ladies of Quality and Distinction’ is part of a wider cultural moment in which the influential roles and contributions of women to the successful establishment and survival of our most long-standing, public-facing, social and cultural institutions are finally being acknowledged. including exhibitions such as ‘Liberators: Extraordinary Women from the Ben Uri Collection’, ‘Hitting the Right Note: Amazing Women of the Royal Academy of Music’ (29 June 2018–18 April 2019), and ‘[In]Visible: Irish Women Artists Archived’ (National Gallery Ireland, 9 July–December 2018).

With English Heritage’s recent admission that only fourteen per cent of London’s blue plaques are devoted to women, ‘Ladies of Quality and Distinction’ is a rich and fascinating contribution to the history of women who shaped and influenced the cultural fabric of London and demonstrates the on-going importance of communicating these stories to the public.

Maria Alambritis is an AHRC Collaborative Doctoral Award PhD candidate at Birkbeck, University of London, and the National Gallery. Her thesis ‘Modern Mistresses on the Old Masters: Women and the Writing of Art History, 1865–1916’ examines the work and influence of late-nineteenth-century British women writers on the developing discipline of art history, particularly in relation to research and knowledge on the Italian Renaissance.

Together with her supervisors Professor Hilary Fraser and Dr Susanna Avery-Quash, she is a co-editor and contributor to the forthcoming special issue ‘Knowing as Much of Art as the Cat? Nineteenth-Century Women Writers and the Old Masters’, to be published in Birkbeck’s online open-access journal 19: Interdisciplinary Studies in the Long Nineteenth Century in spring 2019.